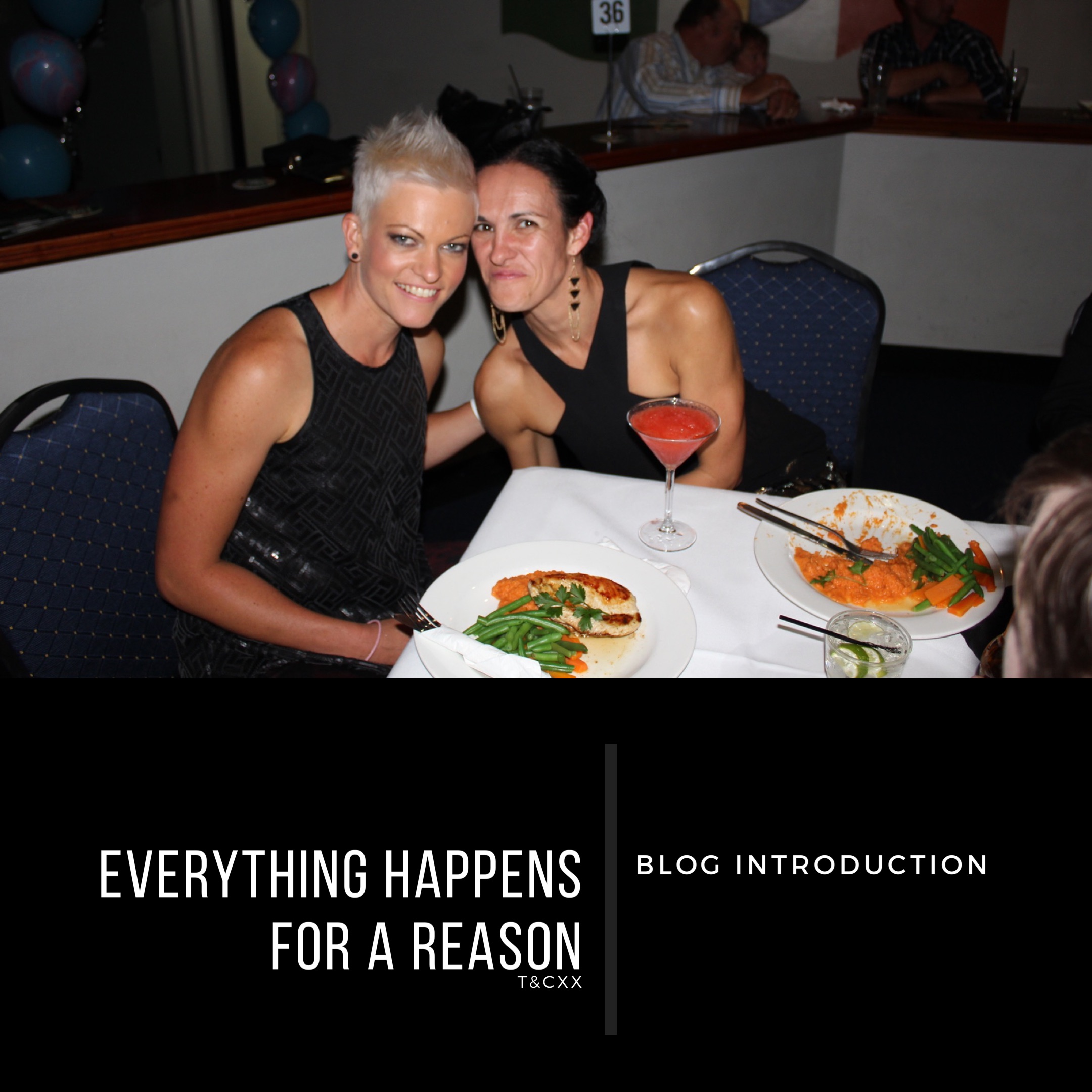 Our story started as friends.

I’ll let Cara tell her story first. If she hadn’t decided to come to Fighting Fit, our paths may never have crossed.

“… I convinced my bestie Candice to come with me and try out this gym I’d heard about and the cool chick that worked there – Fighting Fit and Tess – of course. That was December 2013. We booked in for an initial assessment and went in to meet her.

Now there’s really only one way to say this, but when I walked in and saw Tess behind the counter, I felt like someone smacked me in the face with a phone book. It wasn’t like love at first sight, I was just in awe of her right from the word go.

So we, ok I … (Candice is a fit, strong bitch) struggled while Tess put us through our paces … I couldn’t manage more than a few pushups or situps back then … how embarrassing …

I remember telling Candice that I definitely needed to train with Tess, that she was exactly what I needed.

Christmas came and went, and in January I had a phone call from Tess, asking me if I wanted to book in for PT’s in the new year. After a few emails back and forth, and potentially some procrastination, I did, and then eventually joined a Ladies PT group a few days a week.

I knew right from the beginning that I just wanted to spend time with Tess. She has that incredible magnetism that makes her irresistible. It wasn’t a sexual thing. I just knew I needed her in my life.

We started to hang out, she took me running (omg I was so unfit!), I made excuses to drop things off to her, and we would spend hours together just talking.

At the same time, I was going through a very messy breakup with an ex who refused to acknowledge our situation, was looking after the three boys, working fulltime and craving my own independence. I started to truly appreciate the benefit of exercise in contributing to my psychological and emotional wellbeing, and that one hour a day was truly a blessing at that time in my life.

While chaos surrounded me, little did I know that Tess was battling with her own struggles. She was never one to talk negatively about her life. Little by little we learnt more about each other and the way I felt about her evolved into something more than just wanting to spend time together.

The only inkling she gave that things weren’t totally peachy in her world was one afternoon when I dropped in to her place and I could see that she wasn’t herself and there was a bunch of flowers in the bin. I asked if she was ok and she let me give her a hug, which is a big deal for those who don’t know Tess. But that was it. Not until we sat outside her place after a run one day and just talked, would I have known the extent of her own battles.

All I knew was that I needed to spend time with her, that I was inexplicably drawn to her. I was at ease with her, and without hesitation, myself.

Yep, I totally fell in love with her. It’s not that my world revolved around her, it revolved because of her. I can’t tell you when that changed, but when it did, our lives were never going to be the same. I’ve always known that with love comes pain, but I could never have imagined the challenges we were going to face because of our decision to be together …

Obviously, I met Cara as a new member of the gym. Cara & Candice came through my doors 4 days after I officially bought Fighting Fit. I treated them both like any other member that walked through my doors. They seemed pretty determined to better themselves but both had no idea what they actually wanted.

Both girls told me they would be away for three weeks and wanted to start in the new year. So, 3 weeks went by and I contacted them. I got no reply and had no desire to follow them up a second time … I believe everyone needs to take responsibility for their own decisions … I can’t make that decision for you.

I eventually got a reply from Cara and we started off with some 1 on 1’s like I prefer to do with any newbie. From her 1st session, I knew she was one of those prime members that was keen to learn … and I wanted to help.  Again, the same way I do with every member that has a certain level of determination. I also had an awesome PT group full of like-minded ladies that I eventually persuaded her to join.

At this time in my life, I was pretty focused on just trying to run my business as best as possible … I just wanted to enjoy that and use it has a distraction from the rest of the world at that point in time. I had just come out of a 13 year relationship (yes, with a male) and had shut myself off from the rest of the world (I didn’t want to talk about it) … all friends and family just became background noise. Having someone totally new in my life that knew nothing about me was kinda nice. Cara was easy, she wasn’t the needy type and didn’t have any expectations of me.

Cara didn’t really have any direction in relation to her goals for health and fitness, so I invited her on a few runs. This is where I guess our friendship started to really develop. It was nice having someone to run with that wasn’t competitive and someone that didn’t have to rush off. Her company was so real … she was genuine and wanted to ask questions and actually listen. I can honestly say I have never had a person like that in my life. It was a pretty awesome feeling. The more time I spent with her … I just knew I needed her in my life.

Upon reflection, at this point, I think I may have fallen in love with her. To be honest, it was something I had never felt before – so I had no idea!

5 months into our friendship my feelings were mixed. At this point in time in my life I was dealing with some pretty hurtful business relationships and just kept telling myself the feelings I had towards Cara were not real. I knew Cara was going through the end of a toxic relationship so I kept telling myself to treat her like a friend. I didn’t want to be labelled as the reason her marriage ended, and to break up a family, or to be judged for being with a female. I knew what she was going through and just wanted to be there for her …

I shouted myself a trip to Bali for my 30th. I just needed to run away. Although it occurred to me that I could just stay away, and not have to deal with all the feelings … I wasn’t about to give up on that one feeling left that excited me, even though the rest of my world was falling to bits.

When I got off the plane, Cara was waiting for me. To put it mildly, I was glad I made it back. That was the last time in my life I have felt excited.

From the moment I announced my relationship with Cara at my 30th celebration, life took a steep decline. Although I didn’t know what to expect, the backlash and judgement of people has been eye opening.

The story of our beginning is not rare. There are countless stories of couples who came together, or stayed together, despite all the odds being against them.

We’ve known those that have made it through infidelity, financial crisis and bankruptcy, family tragedies and loss.

What we’ve found in talking to others is the common thread that binds these stories together. It is the fact that they made it – in the face of all adversity, of criticism and judgement, of continual obstacles and challenges – they stuck it out.

We could have walked away from each other. Sometimes we fought with each other, trying to force the other to leave – desperate to save them from the “swirling waters” that was our life at the time. But that would never have worked. I think we both knew that deep down. We didn’t want to do life with anyone else.

One thing we have learnt from our relationship, and that is echoed in the stories of those inspirational people and couples we know, is that without each other there is no reason. That connection is invaluable. It is necessary. If a relationship will withstand, you kind of need both people to be there, more importantly, to want to be there.

So really there was no choice for us. Rather than giving in and giving up on each other, we only pulled tighter together.

This is how our story began.

We recently had the pleasure of sitting down with two beautiful ladies and sisters. They share common stories of a positive childhood, of firm but fair parenting, knowing and learning of unconditional love, and it is evident from their relationship with each other, their partners, children and grandchildren, that they share a core value of family.

The adult lives of these sisters, however, have been vastly different. They are very different people with differing personality characteristics and approaches to life. This has seen two very different relationship patterns, some stable, some not. Neither have been immune to life’s stressors, and both, in their own very different ways, have fought and clawed and never given up, even when the odds were stacked against them.

These sisters share a love and a bond with their children that to us is second to none. The strength of this family value has seen them pull through some of the toughest times, always offering support, encouragement and guidance, but without the judgement and cynicism that plagues some parent-child relationships. It hasn’t always been smooth sailing, knowing that they can’t always “fix” things, or that their children are now adults and capable of making and learning from their own mistakes. But, they have always given their unwavering support.

There’s something about these women. They seem to have their own unspoken understanding of each other. When they speak about their lives, their stories compliment each other, timelines overlap, and they’ve shared each other’s failures and successes (as well as some differing opinions over the years).

What this highlights is that no matter where we start in life, the choices we make and the actions we take can impact upon our trajectories. Regardless of who we are, how different we may be from our sisters and brothers, we all cope. This is human nature. Sometimes this might be about “making the best of a bad situation”, sometimes it’s about digging your heels in and sticking your ground.

No matter when it happens, we all at some point need to own our lives, we need to make peace with our past, and we need to forgive. Making decisions that fail to prioritise ourselves, but rather to please another or to “do the right thing”, will ultimately lead to disastrous outcomes.

Both these women have had a profound impact upon our lives. Their stories, courage and ability to love and give through any weather have given us inspiration when we thought none was left. Our perspective towards life’s curve balls have been altered and we use their inspiration to remind ourselves that life is ultimately about what you make of it.

The time has passed for wallowing. Now is the time for action. Make one choice at a time that moves you in the direction you want to go.